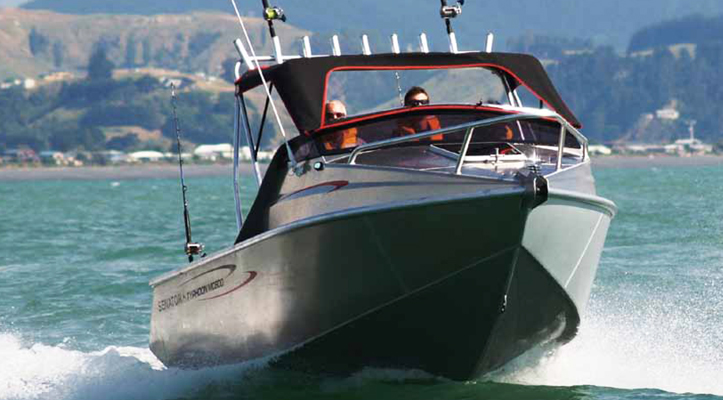 Typhoon For A Downturn –
Senator MC600

At a time when some boatbuilders are retrenching or laying-off staff, there’s a new sense of purpose at Senator’s suburban Onekawa premises these days.

Best known for its shapely pontoon boats, the company parted ways with its erstwhile marketing arm, Firman Marine, earlier this year and is branching out with a network of dealers throughout the country.

The boat being used to launch Senator’s new monohull range is the Typhoon. A 670 Typhoon hit the water in late July (see Trade a Boat August 2008) and the latest is the tidy Typhoon MC 600.

For a start, we ran a tape measure over the boat while she sat on the DMW Premier Series trailer in the yard and found the hull length actually measured out at 6.15m.

The MC 600 (Monohull Cuddy) is already a fair bit of boat for your money, with a generous beam of 2.38m carried well forward into the shoulders of the boat.

“Here in the Hawke’s Bay, the land breeze normally kicks in during the afternoon,” says Thomson. “The bay’s relatively shallow, so it whips up a steep little chop. We designed the 600 so that three big guys could stand comfortably under the soft top and five to six people could fish comfortably from the cockpit…but she will still get up on the plane at relatively slow speed to punch home at the end of the day.”